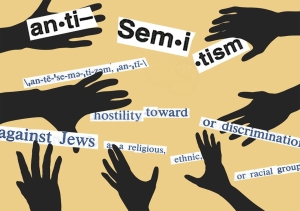 Antisemitism is a deadly shadow that has sadly always been a part of Jewish history. Where does this hatred come from? Some, in trying to point a finger to a root cause, have claimed that the New Testament is fraught with antisemitic sentiment.

Context, context, context.  There absolutely are New Testament scriptures that appear at face value to be eschewing hatred toward or of Jews, however, there are also Tanakh scriptures (Old Testament) that do the same thing!  In the light of the entire passage, and book, a deeper sentiment is being expressed, one that must be examined to glean the entire meaning.

Some discussion on the difficult New Testament passages that appear at face value to be antisemitic can be found on the page that leads into holidays and holiday celebrations.

Some may dismiss the New Testament based on hearsay without having had examined the scriptures for themselves. If you personally have any question about the New Testament’s attitude towards Jewish people, please let’s discuss the specific scriptures that are of concern to you. I will gladly analyze them with you, within the context of the paragraph, book of the bible, and bible as a whole. You may list out the scriptures in question in the comments section below or email. Thank you!

The New Testament is NOT for Jews, or is it?

Why both the Tanakh (Tanach, Old Testament) and the B’rit Chadashah (New Covenant/New Testament)?

Jeremiah 31:30-33 in the Tanakh (Jeremiah 31:31-34 in the Old Testament). “Behold, days are coming, says the Lord, and I will form a covenant with the house of Israel and with the house of Judah, a new covenant.  Not like the covenant that I formed with their forefathers on the day I took them by the hand to take them out of the land of Egypt, that they broke My covenant, although I was a lord over them, says the Lord. For this is the covenant that I will form with the house of Israel after those days, says the Lord: I will place My law in their midst and I will inscribe it upon their hearts, and I will be their God and they shall be My people. And no longer shall one teach his neighbor or [shall] one [teach] his brother, saying, Know the Lord, for they shall all know Me from their smallest to their greatest, says the Lord, for I will forgive their iniquity and their sin I will no longer remember.”

Tanakh or Tanach is a Hebrew acronym that stands for “Torah [The Pentateuch] (Five books of Moses), Nevi’im (Prophets), and Khetuvim [K’tuvim] (Writings)”. The books of the Tanakh and Old Testament have the exact same content. However there is a slightly different order/arrangement between the two, and verse numbers in some instances are different. However, if you compare the content side by side, you will see that they are identical.

To clarify the word “Torah”; in it’s most limited sense “Torah” refers to the Five Books of Moses: Genesis, Exodus, Leviticus, Numbers and Deuteronomy. But the word “Torah” can also be used to refer to the entire Tanakh.

Rabbis may include the term “oral Torah” in the word Torah. That oral Torah, also known as the Talmud, they believe was given to Moses by God.

However what it is is a collection of Rabbinical interpretations of the written Torah. There is absolutely nothing in the written Torah that alludes to the fact that there was another Torah given to Moses. If you find such a scripture, please feel free to post it in the comments section!

There is an account in 2 Kings 22:8 and 2 Chronicles 34:15 of how the written Torah was both lost and completely forgotten for over 50 years and rediscovered by the Temple priests. It is difficult to believe that the Israelites could remember a non-recorded oral law while at the same time completely forgetting what was in the written law.

The words of the oral Torah have absent from them the familiar Biblical wording of “And the Lord spoke…” and “…thus says the Lord”.

If one reads the text of the Oral Torah, one sees the opinions of Rabbis who disagree with each other repeatedly. The Rabbis explain that whenever there are such disagreements, “both opinions are the words of God.”

However, according to the Tanakh, God does not contradict himself. (Malachi 3:6 “For I, the Lord, have not changed; and you, the sons of Jacob, have not reached the end.”; Numbers 23:19 “God is not a man that He should lie, nor is He a mortal that He should relent. Would He say and not do, speak and not fulfill?” Isaiah 40:8 “The grass shall dry out, the blossom shall wilt, but the word of our God shall last forever.”Habakkuk 3:6 “He stood and meted out to the earth; He saw and caused nations to wander. And the everlasting mountains were shattered; the everlasting hills were humbled. The procedures of the world are His.”)

Regarding other “extra biblical books”; there is a cluster of about 14 books, known as the Apocryphal books, which were written some time between the close of the Old Testament (after 400 B.C.) and the beginning of the New. They were never considered as part of the Hebrew Scriptures, and the Jews themselves clearly ruled them out by the confession that there was, throughout that period, no voice of the prophets in the land.

The Old Testament had been translated into Greek during the third century B.C., and this translation is known as the Septuagint, a word meaning 70, after the supposedly 70 men involved in the translation. It was the Greek Septuagint that the disciples of Jesus frequently used since Greek was the common language of the day. Whether or not the Septuagint also contained the Apocrypha is impossible to say for sure, since although the earliest copies of the Septuagint available today do include the Apocrypha, placed at the end, these are dated in the fifth century so cannot be relied upon to tell us what was common half a millennium earlier. Significantly, neither Jesus nor any of the apostles ever quoted from the Apocrypha, even though they were obviously using the Greek Septuagint. Therefore those 14 books are not in the Biblical Canon although they are used in the Catholic bibles.